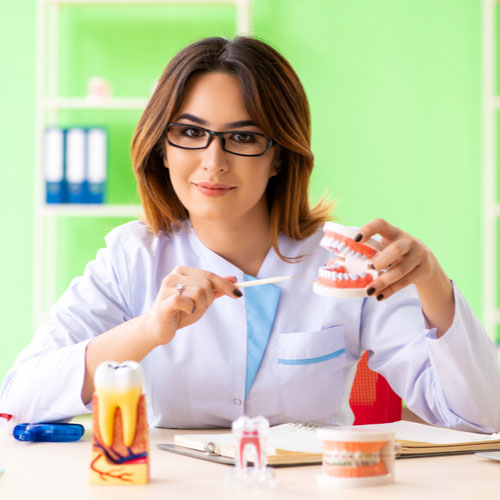 Good dental hygiene involves keeping the mouth, teeth, and gums clean and healthy to avoid diseases. Dental hygiene sessions are a necessity if you want to keep your teeth looking its best. Though you do not need to do it as often as you brush and floss. It should be practiced occasionally for the prevention of tooth decay and gum disease.

A good way to maintain your smile and oral health is by going to the dentist regularly and caring for your gum and teeth. At Queens Medical Center, we ensure that you get the most from your visits. We work with you to provide complete dental care and guide you on how to maintain your smile with the right dental products for you and your family.

Dental Cleanings and Routine Check-ups Regular dental check-up are a vital part of maintaining your oral wellbeing. It is common for your hygienist to do the following during your routine checkups:

1. ADEQUATE BRUSHING OF TEETH – use a soft-bristled toothbrush to brush your teeth two or three times daily. Fluoride toothpaste is recommended for removing food particles and plaque from the tooth surface. Remember to brush the surface of your tongue and gums to eliminate leftover plague causing food particles and give you fresh breath.

2. CHOOSING THE RIGHT TOOTHBRUSH & TOOTHPASTE – whether you are buying a toothbrush, mouthwash, or dental floss, make sure that you go for only those that would give you a healthy smile. Ensure that you purchase only dental products that have been approved by the American Dental Association (ADA). Also, seek advice from your dentist for which dental products are safe for home use.

3. APPROPRIATE BALANCE DIET = HEALTHY TEETH – Eating a balanced diet gives you healthy teeth. The teeth also needs a well-balanced diet same way the bones, soft tissues of the mouth and other parts of the body. Children require a diet that spans across all five major food groups. Most foods that children eat cause the formation of cavity and they are exposed to tooth decay the more they eat such foods. How long food stays in the mouth also has a significant impact. For instance, hard sweets and breath mints remain longer in the mouth leading to prolonged acid attacks on tooth enamel. To keep your children’s teeth healthy and better, give them more of vegetables, low-fat cheese, and low-fat yogurt.

4. WATER FLUORIDATION – this involves adjusting the quantity of fluoride in water to the point where the prevention of tooth decay can be absolutely guaranteed. Most times the fluoride level in water isn’t potent enough to prevent tooth decay, but you should be able to get naturally high levels of fluoride in some groundwater and natural springs.

When it comes to fighting tooth decay, fluoride has always proven effective. Sugary foods cause the bacteria in the mouth to produce acid. The acid consumes minerals from the top of the tooth, loosening the tooth thus exposing you to cavities. Fluoride helps to strengthen and revamp the top of the tooth or enamel. Water fluoridation can help protect you against tooth decay by giving you consistent contact with low levels of fluoride. With fluoride, you are also protected from cavities and your tooth surface can be rebuilt by reinforcing the firmness and solidness of the tooth.

HOW DO I PROTECT MYSELF FROM CAVITIES? Depending on ages

Appropriate oral hygiene expels bacteria and other stuck foods in your mouth that can cause cavities. For infants, clean the plague from the teeth and gums using a wet gauze or neat washcloth. Ensure that you use only water to put your child to sleep.

For older children, brush their teeth for at least two times daily. Also, avoid giving your children foods containing lots of sugar. The American Academy of Pediatric Dentistry posits that you’re expected to visit the pediatric dentist at intervals of six months starting from your child’s first birthday. Visiting regularly will secure for your child a lifetime of good dental health.

SEAL OUT DECAY – A sealant is a protective coating used to shield the chewing surfaces (grooves) of the premolars and molars, where four out of five cavities in children resides. Functioning as a barrier to food, plaque, and acid, this sealant protects the areas that are prone to tooth decay.

MOUTH GUARDS – Recreational activities and organized sports are responsible for causing most injuries in children. Using a properly fitted mouth guard or mouth protector, therefore, is very important to help in protecting your child’s smile. Always ensure that your child uses it when participating in any event that could lead to a blow to the face or mouth.

Mouth guards are effective at preventing broken teeth, and injuries to the face, lips, jaw or tongue. A properly fixed mouth guard should stay secured while your child is wearing it, allowing them to talk and breathe easily.

Confirm from your pediatric dentist about custom and store-bought protectors.

STAY AWAY FROM SPORTS DRINKS – The high sugar content and acids in sports drinks have erosive potential and are even able to melt enamels with high levels of fluoride thus causing cavities. To reduce the dental issues, keep your children away from sports drinks and hydrate them with water before, during and after sports. Ensure that you discuss with your pediatric dentist before consuming any sports drinks.

If you choose to drink sports drinks:

TONGUE PIERCING – IS IT REALLY COOL?

Tongue, lips, and cheeks piercings have grown in popularity, but it will surprise you to know that these piercing procedures are quite dangerous.

Performing an oral piercing exposes you to several risks such as chipped or cracked teeth, blood clots, blood poisoning, heart infections, brain abscess, nerve disorders (trigeminal neuralgia), receding gums or scar tissue. Millions of bacteria inhabit the mouth and oral piercings are notorious for causing complications. In fact, your tongue could swell large enough to seal up your airway!

Common oral piercing symptoms include pain, swelling, infection, an excess flow of saliva and injuries to the gum tissue. Hard-to-control bleeding or nerve damage can occur when the path of the needle is obstructed by a blood vessel or nerve.

TOBACCO – BAD NEWS IN EVERY FORM

Any form of tobacco can endanger your child’s health and cause irreparable damage. Educate your children about the dangers of tobacco.

Teens even have a common misconception about smokeless tobacco also known as spit, chew or snuff, believing it is a safe option to smoking cigarettes. Unfortunately, research has proven that smokeless tobacco is highly addictive than real cigarettes and may be more difficult to stop. As a matter of fact, teens who use tobacco need to be aware that a single can of snuff per day dispenses as much nicotine as 60 cigarettes. You can contract periodontal disease and produce pre-cancerous lesions known as leucoplakias within three to four months from continued usage of smokeless tobacco.

If you have a child who uses tobacco regularly, look out for the following signs of oral cancer:

People often ignore oral cancer in its early stages because it is usually painless. Sadly, oral cancer can quickly escalate, requiring extensive and sometimes disfiguring surgery. In worse scenarios, it can lead to death.

Protect your child against tobacco in any form. It’ll keep cancer-causing chemicals away from coming into direct contact with their tongue, gums, and cheek.

The benefits Xylitol offers to the oral health of infants, children, adolescents, and persons with special health care needs is recognized by The American Academy of Pediatric Dentistry (AAPD).

Research that uses xylitol as either a substitute for sugar or a small dietary addition has revealed a speedy reduction in new tooth decay, together with some reversal of the usual dental care. Xylitol gives extra protection that surpasses all existing prevention methods. It has a long-lasting and possibly permanent effect. Years after the trials have ended, low decay rates still continue.

CARE OF YOUR CHILD’S TEETH

CARE OF YOUR CHILD’S TEETH

A baby’s teeth require cleaning as soon as it erupts. You can do this by cleaning the baby’s tooth first gently with a cloth before ascending to special baby toothbrushes. Below are a few other tips to help you take proper care of your child’s teeth: